Streets Market opens its doors at Yard 56 in Greektown

The grocer is the anchor in the 90,000-square-foot first phase of the redo of the former Pemco industrial site.

The first of two new Streets Market locations in Baltimore opened this week at Yard 56 in Greektown.

The 20,000-square-foot grocery store is one of two retail anchors at the development at 5601 Eastern Ave. across from Johns Hopkins Bayview Medical Center and near Interstate 95.

It is considered the centerpiece of the $77 million initial phase at Yard 56 project that has added several restaurants and retail spots to the site, including a 34,000-square-foot LA Fitness gym. Next to come will be office, hotel, an 82,000-square-foot medical building and 225 apartment units.

The development has been ongoing for about three years in East Baltimore. It attracted the city's first federal opportunity zone investment from investors through the Prudential Financial Impact Investments group in early 2019.

Adding a grocery store to the retail mix was a high-priority for the surrounding community, said P. David Bramble, managing partner of MCB Real Estate, developer of the $80 million Yard 56.

"As you can imagine we are over the moon about the Streets opening and the high quality offering they are bringing to Yard 56," Bramble said on Thursday. "This means alot to the MCB team and the community and we are excited to see our plans coming to fruition."

MCB acquired what was a vacant and abandoned industrial site in 2014 for $3 million and launched a $15 million environmental cleanup there from the days when it held the Pemco International paint plant.

The modern Streets Market at Yard 56 has a large organic fresh produce department and prepared foods in addition to dry goods, Bramble said. On Thursday, bins of fresh vegetables and fruits lined the sidewalk outside the front door, with grand-opening specials plastered on posters on the front windows.

The Washington, D.C.-based boutique grocery chain has also another new location planned in the city.

Besides Yard 56, the other market will be located in Charles Village and replace Eddie's Market, which closed for good in December after being open for decades at 3117 St. Paul St. MCB Real Estate and Workshop Development acquired the Eddie's space in February for $1.51 million, state records show, and will acquire more space next door for a total redevelopment of the block in the coming year or so.

Streets at Yard 56 will have its grand opening on Friday morning with a ceremony that will include Bramble and Mayor Brandon Scott. 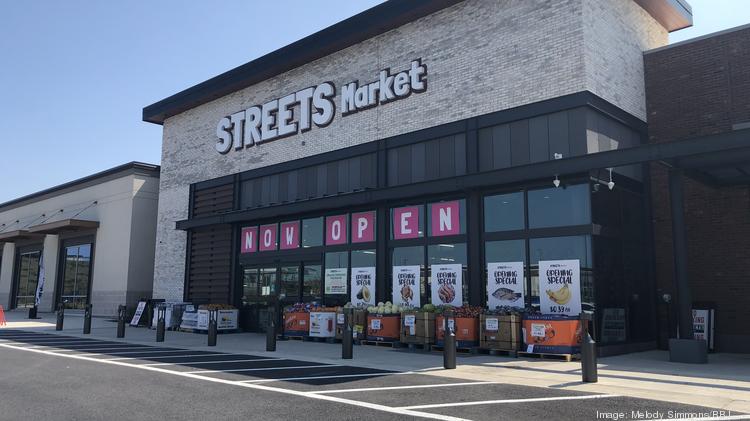